Why book with us

The Villa Agostoli farmhouse is only 4 Km away from the centre of Siena.

Siena, Unesco World Heritage since 1995, is one of the largest and better kept historic centres of medieval origin in Europe.

The city has Etruscan origins, and has been under Roman Langobardic dominion.

Its fortune is due to the fact that it was a very important strategic centre in the ancient Francigena way, the path that linked Rome to the north of Europe.

The city grew considerably during the Middle Ages, the city walls were enlarged in particular between 1180 and 1290.

Siena immediately became a very important site for commerce (in particular for clothes, saffron, wine, wax and spices) and for the banking activity, brought forward by the companies belonging to important families such as the Malavolti, the Piccolomini, the Buonsignori.

The centre of the city is Piazza del Campo that is located in the middle of three hills (the terzi) were the city has developed.

The square has the shape of a shell, its main building is the municipal building that features works of art such as the large fresco of the Maestà by Simone Martini (1312-1315).

The square is alive and pulsating with people throughout the whole year, any moment of day and night will bring unforgettable emotions and views.

Another unmissable place is the Piazza del Duomo where you can find one of the most renowned masterpieces of Gothic art: the cathedral, surrounded by the ancient Santa Maria della Scala hospital (today a museum) and the baptistery.

The Duomo di Siena is a masterpiece of architecture and art, that features precious painting, sculptures, and magnificent pavements with marble inlays.

It can be visited throughout the year, just like the near museum of the Opera del Duomo and the facciatone, the ancient façade that the cathedral should have had before the coming of the plague in 1348, today a strategic point from which you can admire a 360 ° panorama on the historic centre.

The historic centre of Siena is completely closed to traffic, this allows all visitors to walk in absolute relax and tranquillity through the amazing and winding streets that feature beautiful and ancient buildings and churches (among these, via di città, the palace Chigi Saracini seat of the Accademia musicale Chigiana, national gallery, the sanctuary of Santa Caterina, the church of San Domenico, the church of San Francesco)

The palio was initially one of the games that animated the life of the ancient medieval city of Siena.

It took place “alla lunga”, that is along the main streets of the city and consisted of a race of horses mounted by jockeys sent by lords that wished to display their supremacy.

The race took place the day following the solemn procession of the delivering of the candles and incenses at Maria Assunta, religion and secularism have therefore always been part of the tradition of the Palio.

Around 1500, the Palio acquired the traditional features that remain up to this day, with its 17 Contrade, the 17 city quarters that were born from the ancient military companies. The Palio race started to be performed “alla tonda”, that is to say within Piazza del Campo.

It’s hard to explain the Contrada life, every citizen of Siena is more or less part of a second family, the Contrada, that accompanies him throughout his whole life. When a child is born in Siena, in fact, a flag is raised in his quarter with a blue or pink bow, and when someone dies, his coffin gets wrapped with the symbol of his Contrada.

The Palio races (two Palios take place during the year, one the 2nd of July and the other the 16th of August) represent only the apex of the Contrada life, that goes on throughout the whole year with dinners, social and cultural activities.

The palio is an authentic celebration that has had, thanks to the people of Siena, the strength to stay intact with its passion and enthusiasm.

The small town of Monteriggioni, just 5 km from Villa Agostoli, features the best example of walled city of the land of Siena. This medieval village is in fact surrounded by beautiful and well kept circular walls. It has been founded by Siena’s people in 1203, as an outpost against Florence, the walls were raised in 1213-1219 and restored in 1260-70 after Florence’s siege in 1244. Inside the walls, the atmosphere is special, like a trip through time, especially celebrated every year during the medieval fair that takes place in the Summer. The central square of the town includes a church in Romanesque-Gothic style.

A marvelous example of medieval city (35 km from Villa Agostoli, easily reachable by car), with its structure left intact since 1200.
A typical feature of the town is the ancient tower-houses on the historic center, they belonged to the local nobles, the families competed to have the highest tower, that was a symbol of their power.
Don’t miss the Piazza del duomo, the Cathedral with amazing cycles of paintings by the Lippo and Federico Memmi brothers and by Domenico Ghirlandaio, and the Palazzo del Podestà.

The territory of Chianti is the most suggestive coutryside area of the heart of Tuscany; it is located south of Florence and goes up to the North of Siena. Villa Agostoli is located in the area called Chianti Colli senesi.
This beautiful area’s main feature are the renowned vineyards that produce the well known Chianti red wine, regulated by strict specifications.
Sweet hills with never ending vineyards, olve groves, towns and farms, an immersion in an enchanted and suggestive world.
It deserves a slow visit by car with breaks to take picture and enjoy tastings.
There are many towns to visit, such as Castellina in Chianti, Gaiole in Chianti, Radda in Chianti, the castle of Brolio.
These fantastic views were made eternal by the director Bernardo Bertolucci in the movie “Stealing beauty”.

The landscape of the Crete senesi

The area to the South of Siena is a unique and magnificient territory called the Crete Senesi (just 10km from Villa Agostoli, can by visited by car).
The poet Mario Luzi defined it as an open sea, it features clay terrains with plantations of wheat and other terrains dedicated to farming. Its colors change with the seasons, from bright green of spring to the yellow of Summer. The hills are full of churches, castles, farms.
You will take beautiful photos!

The abbey of Monte oliveto

Overlooking the landscape of the Crete senesi, it is a large monastery, still active, founded by Bernardo Tolomei in 1313, a noble from a Siena family that, at the age of 40, abandoned the city life to move to an isolated countryside area that beloged to his family.
Approved by Benedictine rule, the building of the monastery started in 1320.
The church is especially worth visiting, as it contains masterpieces by Sodoma, the wooden choir by friar Giovanni da Verona, the ancient library and pharmacy.

South of Siena along the old Via Cassia is where another amazing territory is located: the val D’Orcia.
Sweet hills with fields of wheat, vineyards, groves, ancient towns… dive into a world frozen in time with beautiful views.

You easily reach, from Siena as first stop, Montalcino, the heart of the production of another great wine of this territory besides the Chianti, the Brunello. Worth visiting in Montalcino: the Rocca and the city and diocese museums, and the cathedral.

An ideal second stop would be the suggestive Romanesque abbey of S.Antimo, that according to legend was founded by Charlemagne in 781, has been a powerful benedectine abbey, during the middle ages its abbot was one of the most powerful of the area, later in 1462 Pious II terminated it, including it in the diocese of Montalcino.
It’s worth visiting the Church, that features Cistercian influences, its external decoration is made with travertine and onix, materials that give it a birght and golden aspect.
The abbey is surrounded by gardens and olive groves. You should not miss the Gregorian chants of the monks during religious celebrations.

A city ordered by Enea Silvio Piccolomini, a noble man from Siena that became Pope with the name Pious II; in 1459 visiting his native city of Corsignano he decided to transorm it in an ideal town in memory of its origins.
The city was therefore born according to the teachings of Leon battista Alberti and the guide of the Florentine architect Bernardo Rossellino, the city is one of the most famous examples of 1400s architecture in the world.
In the idea city of Pope Pious II you will find yourselves surrounded by an experiment of 1400s urbanism. you should not miss the Cathedral, the Bishop’s Palace, the Municipal Palace.
A typical product of the town is the renowned sheep cheese of Pienza! 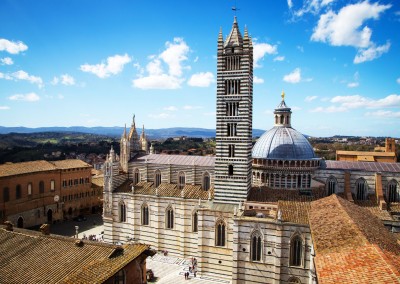 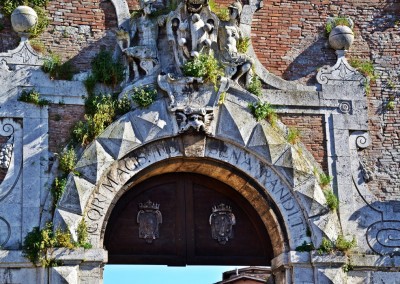 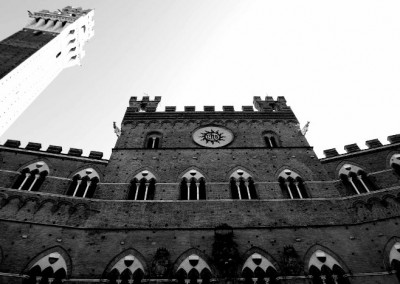 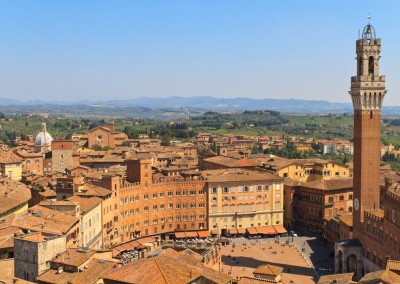 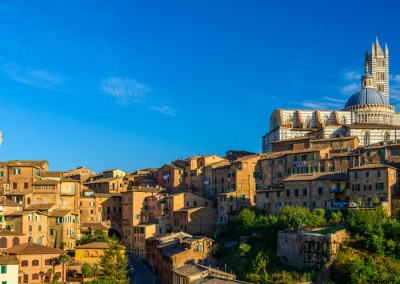 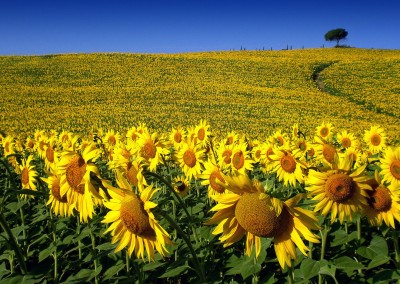